In our blog, we look at various aspects of the restaurant business – from the introduction of automation systems (like Jowi) and creating menus, to work to reduce the noise level of the room and use Google to find information about potential customers.

As in any business, restaurant owners are counting on making a profit. Hence all the above described efforts to create the best conditions for customers. But the psychology of the visitors also helps to earn more – restaurants actively use this. Today, we will tell you about several techniques by which institutions encourage their guests to pay more.

In psychology, there is a theory known as the “paradox of choice”, according to which, the more options there are for a person, the more uneasy he feels. In other words, people do not want to choose from a large number of options and spend a lot of time on it.

The restaurant is more profitable to give the guest a small list of dishes in each category – then the choice will be made faster and with more positive emotions. The menu developer Gregg Rapp said in an interview that the ideal number in this regard is seven.

When we include more than seven dishes in the menu, for the guest it’s too much, the numbers press and embarrass him, and when a person in doubt, he usually orders what he has already tried. On the one hand, there is nothing particularly bad in this, but a good menu should encourage a person to try something new (and more expensive).

Studies have shown that the ideal number of dishes in fast food restaurants is 6, and in more expensive establishments from seven to ten. 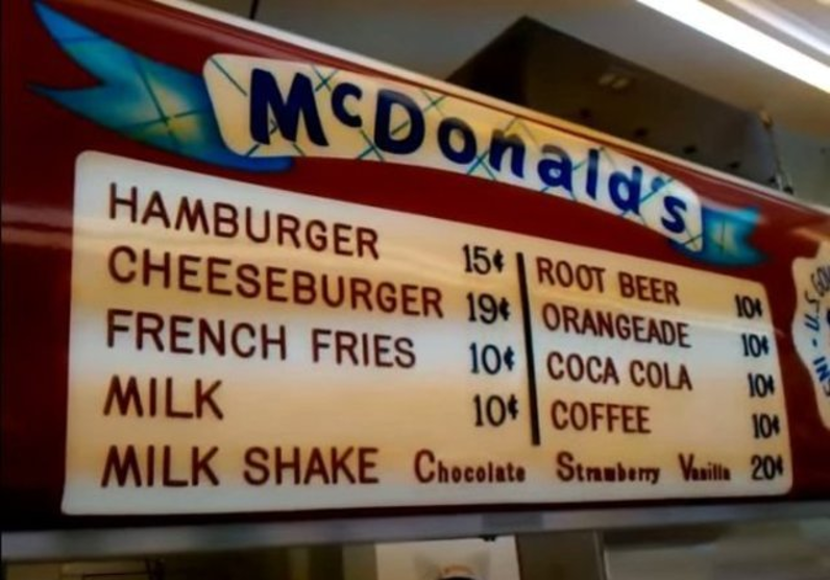 The initial menu of McDonald’s was small, now it has more than a hundred titles, and the company is facing a drop in sales

A study by Cornell University experts showed that restaurant visitors prefer to order dishes that are colorfully described in the menu. Other researchers already from the University of Illinois found that bright descriptions increased sales of dishes in the institution studied by 27%.

The same professional menu creator Gregg Rapp in an interview on NBC “Today” gave an example of a restaurant in which crab pies were served. The dish was described as “a delicate pie with a rich taste, prepared with hands of sweet crab meat, with the addition of mayonnaise and a spicy mixture of seasonings sprinkled with golden cracker.” Using such vivid descriptions allows the visitor to clearly imagine the pleasure that he will receive by ordering a dish . As a result, the guest is more likely to be satisfied at the end of lunch.

In addition, studies have shown that sales increase and use of the menu names of brands that are familiar to visitors. That is why T.G.I. Friday’s use Jack Daniel’s sauce or Minute Maid juices.

Using expensive dishes to attract attention to cheaper ones

Rapp says that restaurants create special traps in the menu – a very expensive dish attracts attention, as a result of which the price of cheaper seems justified.

Most likely the guest will not take a lobster for a couple of hundred dollars, but seeing such a dish in the menu, a steak for a few dozen dollars no longer seems so expensive.

In addition, there is one more psychological moment – within the amount that the visitor is willing to spend in a restaurant, more expensive dishes are more likely to be valued higher. In one study, guests of the same institution were offered identical desserts, but in the first case, the price was $ 8, and in the second case, only $ 4. Differences in food were not available, but a more expensive dessert was rated as more delicious. 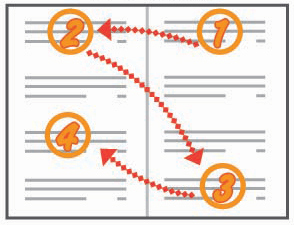 Restaurants are exploring the scenarios of visitors viewing the menu. Studies show that visitors are more likely to order a dish that caught their eye first. Next, you just need to understand exactly where people are looking at once, how to open the menu.

For a long time in the industry it was believed that people looking in the upper right corner, and the whole process of studying the menu corresponds to the scenario in the picture below:

Therefore, in the upper right corner usually have the most favorable for the institution drinks and meals.

However, recent eye-tracking studies by American experts have shown that, in fact, visitors are more inclined to read the menu as a book, from top to bottom. 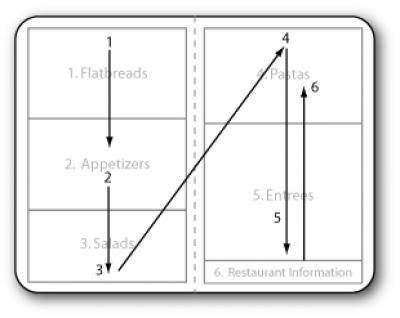 Therefore, the most advanced in the design of restaurants now create their own menus in view of the fact that the “point of attraction” where users are looking is not in the upper right corner, but on the left.

Music creates a “mood for spending”

Researchers from the University of Leicester in the UK found that classical music against the background in the restaurant encourages visitors to spend more, because they have the impression of their own wealth. At the same time, the use of less sophisticated pop music led to a 10% decrease in the total check.

Different sizes of portions of the same dish

This technique is called “bracketing”. A restaurant visitor does not know how small a “small” portion of a dish is, so it seems to him that its price is justified (there’s less food there). However, the restaurant actually wanted to “sell” this smaller portion, and to stimulate the purchase, a more expensive and large portion was used.

Sales of the restaurant can be lifted and simply adding to the menu images of food (although it is not so easy to photograph the picture – we wrote about this process in one of the past materials). According to Rapp, photos in the menu increase sales by 30%.

Researchers from the University of Iowa conducted an experiment during which in a restaurant at a children’s camp, teens were given a menu with photo salad and without. Those children who saw the image with a probability of 70% higher decided to order this dish.

“You react to the image as well as reacting to the plate with food in front of you,” says Associate Professor Brian Menneke. – If you are hungry the reaction will “order myself as in the picture”.

This effect is further enhanced by the use of electronic menus in which the dish can rotate or move. According to Menneke, the more realistic the picture, the higher the probability of an order.

In this case, restaurants rarely place in the menu images for all dishes. This is because, a lot of pictures distract visitors, and the institution itself seems more “cheap”. Therefore, in very expensive restaurants, there may not be images at all.