Do not recover from lard, but from its quantity! (You can get fat from the most useless oatmeal if there are bags in it). If you lead a normal sedentary or about a way of life, you put 10-30 grams of lard a day. If you are already obese and you are prescribed a low-calorie diet – not more than 10 grams per day. Distinguish “true” lard – subcutaneous fat, directly with the skin – from similar products. Bacon, neck, etc. – not subcutaneous, but intramuscular fat. In addition, along with the protein, that is meat, and this mixture is not so hot that it’s good.

The most useful fat is simply salted, with garlic or pepper. Good and smoked, but only “home-made”, with a haze. At meat-packing plants, fat, brisket and other pork delicacies are smoked in liquid, and this is not comme il faut, the properties of the product do not change for the better.

Not certainly in that way. In a healthy person with a normal stomach, the present lard is very well digested and does not overload the liver. In general, the most valuable fats for us are those that melt at the temperature of our body, i.e. about 370. They are fuller and faster than all the rest are digested and absorbed. Their list is exactly the head of lard. But, of course, fat, like any fat, requires for its digestion bile and lipases (special substances in the stomach and intestines). Therefore, in cases of violations of the production of bile and saponification of fats, doctors do not recommend it. 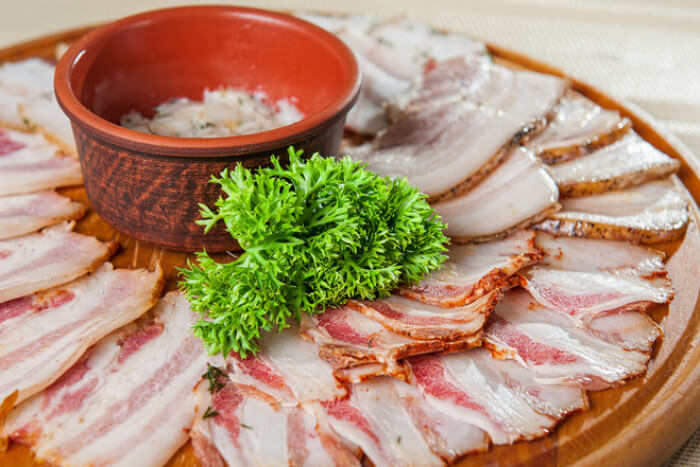 And fine! Because it is a magnificent structure – subcutaneous fat, in which cells and biologically active substances are preserved. For example, the most valuable of fatty acids is polyunsaturated arachidonic acid. It is very rare, in vegetable oils there is none at all. You can not live without it. Arachidonic acid is a part of all cell membranes and the heart muscle is needed. In addition, hormones, immune reactions and cholesterol metabolism can not be avoided without it. There are other essential fatty acids (they are called vitamin F) – linoleic, linolenic, palmitic, oleic. By their content, by the way, fat is close to vegetable oils. Do not forget about fat-soluble vitamins A (it is here up to 1.5 mg per 100 g), D, E, and also carotene. As a result, the biological activity of fat is 5 times higher than that of oil. So in winter, “pig products” – just what you need to maintain vitality and immunity.

Yes, he is present here, but even less than in cow oil. And there is nothing terrible in it. Do you think it will immediately begin to be deposited on the walls of the arteries and begin atherosclerosis? Nothing like this! Doctors have long established that the amount of cholesterol in the blood and tissues depends little on how much you ate it. This substance is perfectly synthesized, even if you do not eat it at all. Therefore, cholesterol metabolism is much more important: what the organism will get, how much it will do and how it is used. By the way, arachidonic, linoleic and linoleic fatty acids just “clean” the vessels from the deposits. So a small piece of fat with vitamin F – only to the advantage in the prevention of atherosclerosis. And the cholesterol in it will go, for example, to create immune cells (lymphocytes and macrophages) that save the body from viruses and other pathogens. Even the intellect without cholesterol anywhere – in the brain it is more than 2%.

Alas, not true. In Massachusetts, the connection between health and fats in food began to be investigated in the first half of the 20th century and continues to do so until now. So, the most healthy and physically active people are those who eat both animals and vegetable fats! Fat should account for about 30% of calories per day. (Note: do not eat 30% of fat, but get 30% of all energy from them.) Simply put, 60-80 grams per day. And among them only one third is vegetable fats. We need 10% polyunsaturated fatty acids, 30% saturated, and as much as 60% monounsaturated. This ratio of acids is in … yes, pork fat, as well as in peanut and olive oil. So you are going to cook fries – better on fat! 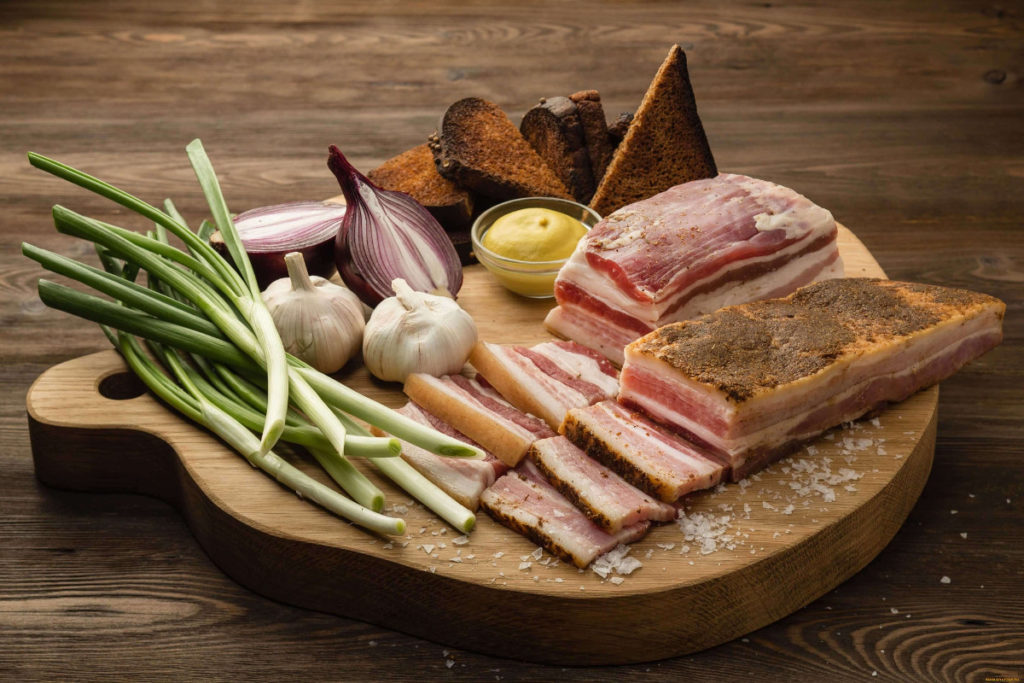 Yes, when frying, lard loses some of its useful properties and acquires toxins and carcinogens. But vegetable oils behave no better. It is worthwhile to warm them for a while, as they abruptly cease to be absorbed. But warmed bacon on the contrary, is digested better than in cold or hot-fried. So the output is simple: fat should not be fried until the state of squash, and warm on low heat.

Paradox: bacon and bread are just what the doctor prescribed! An amazing natural combination, in which both products are perfectly absorbed. Of course, we do not mean buns-pampushki, but grain bread, from flour with coarse grinding or with the addition of bran. Of course, this is for healthy people who are not obese and digestive problems. When losing weight, do not forget too: it is an excellent source of energy. Dietary option – eat lard with vegetables, for example, with cabbage. You can have a snack, and you can make a hodgepodge with it, just do not overcook. But gastronomic joys like bacon to put on bread really is not worth it. They in general with weight loss are allowed in microscopic amounts – about 5 g. But this is enough to give a taste, for example, on duty stewed cabbage, carrots or beets. All these dishes are the invariable companions of low-calorie diets, and to what they are insipid! A 5 g of brisket or bacon just give them a taste and aroma. 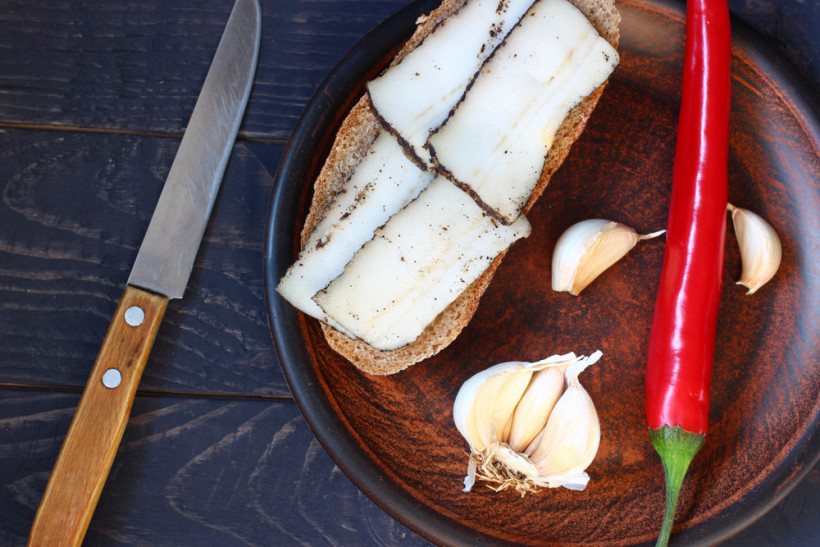 That’s the truth – fat is a wonderful companion of alcohol. Mainly because it does not allow you to quickly get drunk. The fatty fat envelops the stomach and does not give a drink with degrees immediately there to suck. Of course, alcohol will still absorb, but later, in the intestines, and gradually. Alcohol, for its part, helps to quickly digest fat and decompose it into components. By the way, it is absolutely not necessary to use bacon with gorilka, I mean with vodka! With a glass of red dry wine, it is much more delicious. Do not believe me? Check for yourself!